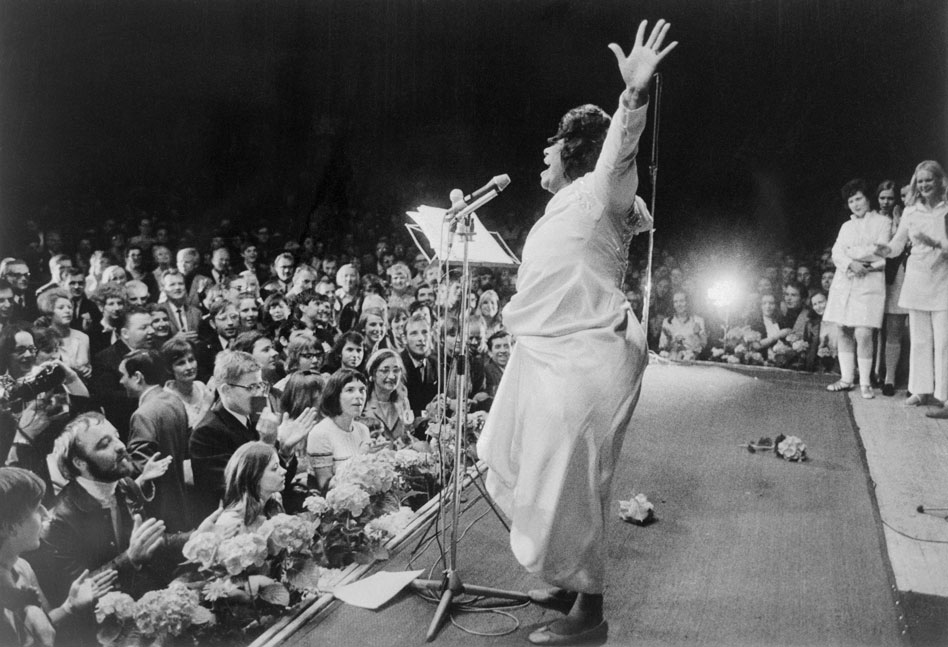 The trick is to tell him the dog can stay in bed with us for the first book. We settle down in the nest of pillows and blankets. Poor, long-suffering Noodle is crammed into my boy’s insistent grasp.

We begin with Mahalia Jackson: Walking with Kings and Queens. The illustrations are rich and the story simple enough.

Simple does not always mean comfortable.

Bug listens and the dog drifts into a warm stupor.

Ms. Jackson left school in 4th grade to take care of her baby cousins and only returned when she was 16 and living in Chicago. She soon had to quit yet again to work as a maid and a laundress. Through all this, she sang in churches, she lifted congregants to their feet. People joined because her voice called to them.

When we finish the book, Bug asks, “What is gospel?”

I give him the barest definition then search up a video on my phone. There she is, young and vivid, her voice weaving in and over a gathered crowd’s soulful noise. She vibrates, filled with light and bright as the sun. The hall is an unnamed church. It is crammed with people, white and black both. At the lectern on the other side of the room, Martin Luther King, Jr. waits with a patient smile.

Bug knows that face, of course. From his first years, King’s image and his words have           stood with those of the founding fathers and the flag to which he pledges allegiance.  They are basic building blocks in the canon of his education. For him, “I Have Dream” is a prayer both fixed and abstract existing in another time and context. King is prophet from first introduction, forever commanding an elevated position above a faceless crowd.

Now, on my tiny screen, the man, real and revenant, young again. The camera pans from Ms. Jackson’s crackling energy to Dr. King’s measured calm. Heads bop in and out of the frame. My son is transfixed. On the jumpy, amateur film, King steadies himself and seems almost uncertain where to fix his gaze. The force drawing people into jubilation is not him but this woman who opens her voice, this surge of power in song.

Bug is up on his elbows, staring with wide eyes into the screen. “Who is that?” he asks.

“That’s her,” I say. “That’s Mahalia Jackson. This is during the civil rights movement.”

Usually when we do what Bug calls “learny things,” he is more than willing to roll his eyes and tell me how boring it all is. He endures until we can get back to the fun stuff, to Rick Riordan and teen demigods doing battle with gorgons.

For this moment, Poseidon waits. Bug watches, immersed. The camera turns to the room as the song quiets. Young folks and old, black folks and white, faces alive on the long-ago film. They are crammed in together, expectant, ready to step through the door one voice has throw open. 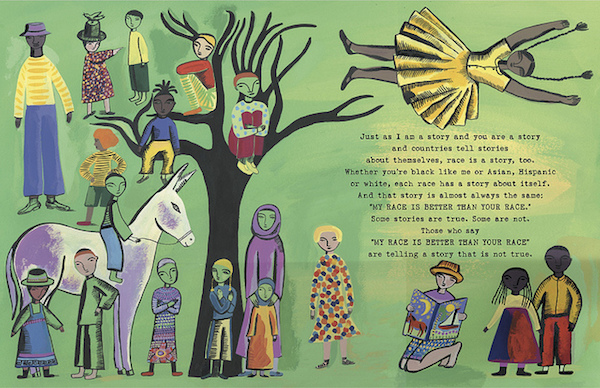 The mother with a son Bug’s age tells me she wants to raise her child colorblind. She is white, her boy Latino. She says our children will be able to grow up without racism. She says in her family, they choose not to point out differences.

My voice stumbles before overreaching. We’re both on our way somewhere. In this fleeting conversation, I say too much and not enough.

It’s a mistake for well-meaning white liberal parents to avoid conversations about race and bias. Racism is happening. It is grown right into the structures that govern our lives. What good do we do if we fail to give our kids a vocabulary for understanding it, for talking about it? For changing it?  END_OF_DOCUMENT_TOKEN_TO_BE_REPLACED