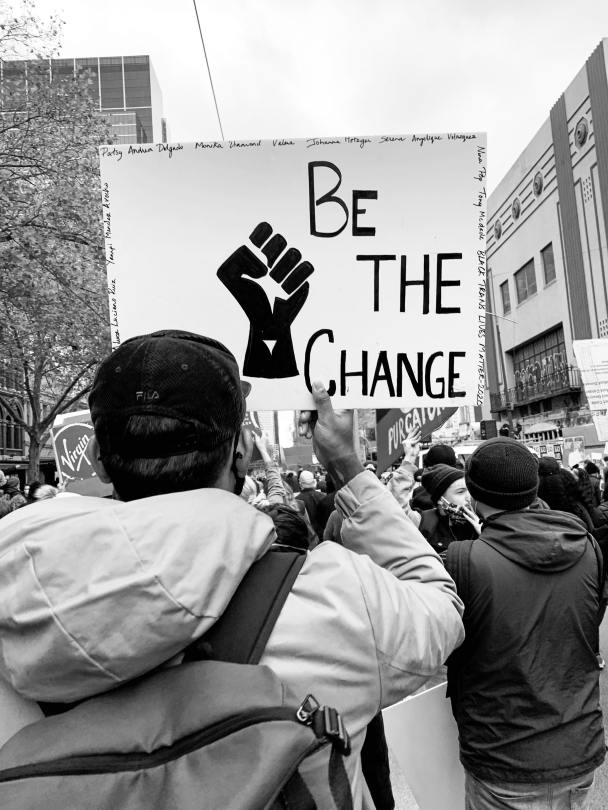 END_OF_DOCUMENT_TOKEN_TO_BE_REPLACED

This time last year, I decided to change how I read. Or, more accurately, to change what I read. It was one small way to keep breathing expansiveness and hope at a time when despair threatened to suffocate both.

As is true for any bibliophile, reading fills up swaths of the time I’m not working or sleeping. Certainly other activities populate the days — eating, dancing, hanging with the kiddo, chilling with the girlfriends. Church and family. In fact, I trip and tumble over the heaps of stuff comprising our days. It’s a wonder stories make it in here at all.

Nevertheless, as is also true for any bibliophile, I find a way. The rare hushed hours, those still stretches, most deliciously belong to books. Bedtime, summertime, solitary dinners. And not always solitary. Sometimes my boy and I read side-by-side at the table weaving tendrils of languid conversation into the quiet. Even at eleven years old, Bug still wants me reading aloud every night at bedtime. We travel through the fantasy worlds we’ve entered together. Having only just acquired a TV after nearly five years without, the universes of film and television hold little appeal. Our secret indulgences almost always involve the page. END_OF_DOCUMENT_TOKEN_TO_BE_REPLACED

If I hold a room the way the sparkling statue lady does tonight, book-touring her paleo-pedicure-CrossFit happy meal of neoliberal feminism, how will I use my voice?

I too could propitiate the gods of privilege. I might tug loose one rough thread of the story and call it struggle. Might forget to notice who inhabits the room. And the design of it. How thick the walls. Who cannot breach them.

Or will I speak truth to power?

END_OF_DOCUMENT_TOKEN_TO_BE_REPLACED

When I dare to be powerful, to use my strength in the service of my vision, then it becomes less and less important whether I am afraid.

I buy the house for the future. Political variables do not enter into the equation. Of course the system will stay healthy enough to sustain my son and me. Housing markets rise and fall. Financial markets swing from bear to bull. Social security may last or disappear. Through all this, my house is insurance. The same is true of my education, my work experience, my retirement savings, my kid’s college fund. The road will have its bumps but we’ll be okay, more or less.

My decision fails take into consideration that truth is only assumption and that nothing is fixed.

Now a fear takes root, a fear bigger and more eclipsing than any I’ve ever experienced. Inside this fear swim all the possibilities of a much darker future. Inside this fear dawns a recognition of the fragility of my security.

Privilege, as it happens, will not protect me.

END_OF_DOCUMENT_TOKEN_TO_BE_REPLACED 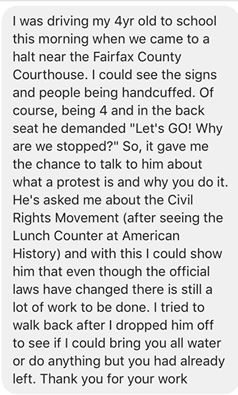 In February 2015, Natasha McKenna, a 37-year old neighbor and mother, called 911.  The help she expected was not what showed up.  Instead, she was herself arrested on an outstanding warrant.  In custody, she suffered a mental health crisis.  She was restrained while naked and put into leg shackles and handcuffs.  Six Fairfax County police officers in hazmat suits put a bag over her face and tazed her four times.  She stopped breathing.  Natasha McKenna died a few days later.  The deputies responsible for her death faced no charges and continue to work in law enforcement.

Today, SURJ Northern Virginia gathered at the Fairfax County courthouse in front of the detention center where Natasha McKenna was held and brutalized.  The protest found its way to Route 123, a narrow and busy corridor through downtown Fairfax.  At 9:00am right during rush hour, we stepped out into the street and stopped traffic.  Coverage of the story is here and here and here.

END_OF_DOCUMENT_TOKEN_TO_BE_REPLACED

People are getting live-killed on Facebook, y’all.  If we aren’t showing up now, then when?  It’s time to get out there.

Over 70 folks came out for the SURJ (Showing Up for Racial Justice) meeting.  They had to bring in more chairs.  After last week in America, despair and outrage have combusted into something that refuses to stay contained.

The meeting was two hours of focused, efficient movement.  We engaged in small group discussions about concrete things we’ve seen white allies do to disrupt racism and cultivate justice in our communities.  We heard from the organizers about activities that have gained traction in the first year of this young organization’s life: immigration reform, police accountability, renaming buildings that celebrate the Confederacy, and coordinating a region-wide canvas in majority white neighborhoods in the run-up to the presidential election.  We then split into breakout sessions for a deep dive into each of these areas.  Finally, we learned about the next public action planned for this coming week.

Around the country, ally organizations are stepping up to make a stand for Black Lives.  The focus is on police departments, sheriff’s offices, and Fraternal Orders of Police.  Affiliated organizations led by People of Color have put out the call to SURJ and other white allies to take bolder action on issues of police brutality.  Facing our white privilege means more than talking about it on social media.

It means showing up.

It’s time to take our horror at what happened to Philando Castile and turn it into a movement.

And what happened to Alton Sterling.

And Freddie Gray.  And Trayvon Martin.  And Michael Brown.  And Eric Garner.  And Tanisha Anderson.  And Tamir Rice.  And Zamiel Crawford.  And Dominick Wise.  And Frank Shephard.  And Vincent Valenzuela III.  And the 5 Dallas police officers, some of whom had stood with the protestors before the shooting began.

And so many more, each a story.  Each a neighbor.  Each a life blown short by a force whose call to protect has gone haywire.

The organizers asked who would be there for the coming action.

At a public protest, my skin and income lower the risk of abuse to negligible.  This fact does not make me proud.

It makes me raise my hand.

It’s time to show up.