After the small scuffle at the Chicken School about leaving (he hates leaving), the tiff in the car about the lipstick (he threatens to smear it on the ceiling), the cuddle on the couch and the talk about talking about feelings (“Mom, I don’t know how to explain how I feel!”), the dinner I make from scratch in 15 minutes because I had an odd moment of foresight and marinated the chicken and prepped all the sides last night (“This rice is so good!”), the conversation sputters and Bug zones out. I catch him staring in the general direction of the dark kitchen window. We loll at the kitchen table, too tired even to drag ourselves upstairs to bed. I know there is homework in his backpack, but I just can’t bring myself to force it on him tonight. Not at 8:00pm on a Wednesday, and not in kindergarten, for Pete’s sake.

I open the Style section to get my fix of Carolyn Hax, but Bug is not having any of it. He reaches for the paper and scoots closer to me.

“Okay.” I turn to the Kid’s Post at the back, and we read this article about the fact that pets can have preferred paws, just as humans have dominant hands.  As we work through the percentages, I pause. “Do you know what it means that 10% of people are left handed and 90% are right handed?” He does not. “Which hand are you?”

He thinks about it then holds up his right.

“You and me, we are in that 90%. Here, let’s see if we can figure this out.” I find an envelope and a scrounge up a couple of pencils. I make ten hash marks and then draw a circle, dividing it into ten sections. “Ninety percent means nine out of every ten.” We count the marks together, cutting off the single leftie at the end. I keep checking Bug’s body language for signs of resistance, but he has picked up the pencil and is counting along with me.

We talk through coloring one slice of pie for left handed people. We write together “10%” and “90%.” I don’t know if any of this is making sense to him, but his eyes are bright and he is copying every single thing I do, including my little key for which section of the graph represents which hand. We do the same exercise for dogs, which, as the article indicates, are usually about 50% left-pawed and 50% right. I ask him to compare the two circles, and see how much of each one is colored in. “See? Many more dogs use their left than people do. Half of dogs are lefties, but only that little bit, that 10%, for people.”

His eyes light up, and he breathes a big “Wow!”

“So, the article says something funny about cats. It says that 50% of them are right-pawed, 40% are left-pawed, but 10% have no preference.”

We find a fresh envelope and start on the cats. Bug is buzzing with excitement despite the fact that it’s nearing 9:00 and he almost fell asleep in his barbecue sauce. He is bent over the page now, making his hash marks and circles. I explain that he can remove all the zeroes from his percentages and make them into numbers easy to count. He decides that right paws should be dark, left paws should be dots, and no preference should be stripes. He draws a key, makes his ten-slice pie, and begins to color in the sections.

“Bug, look what you did! You made pictures to compare dominant sides for a whole population of dogs, cats, or people. This is really cool stuff, and it makes the numbers easier to understand.”

Beaming, he writes “cats” on the top of his last drawing and tells me again what it all means. I am dumbfounded. This, from the boy who claims he is too tired even to set forks on the table at dinnertime? 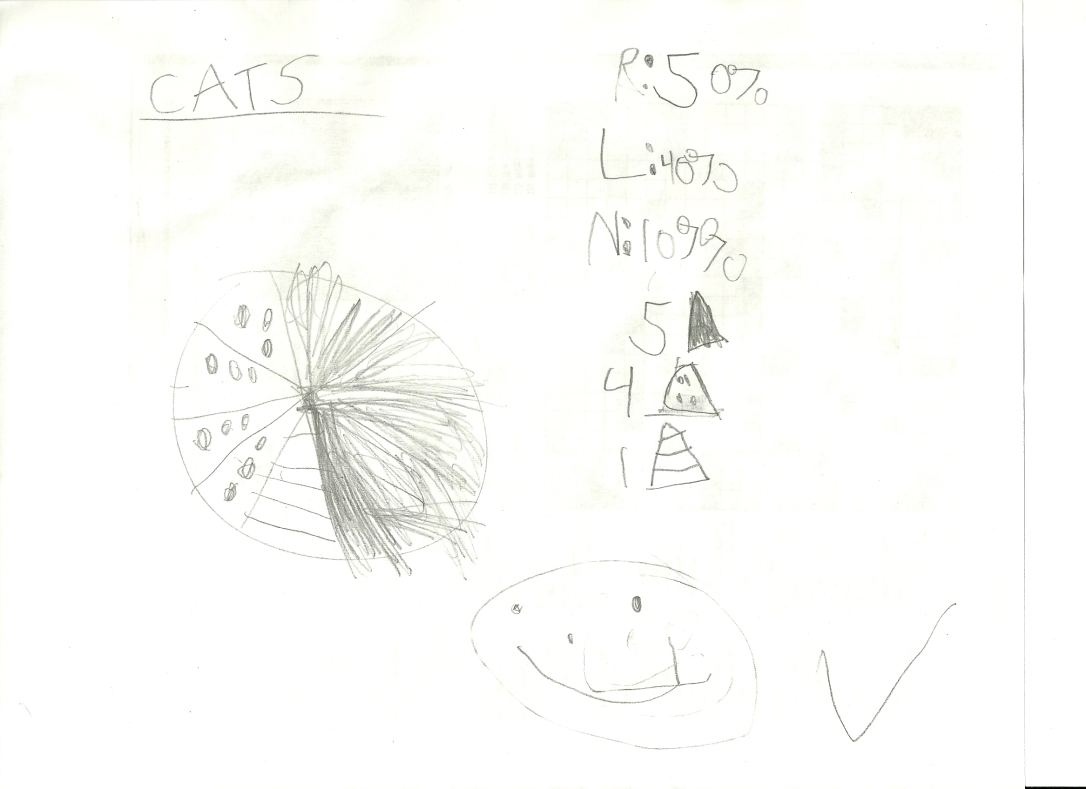 On nights like these, I am more resolved than ever to keep a TV from setting foot in our someday-home. It is nearly an hour past bedtime at the end of an exhausting day, and my boy would like nothing more than to stay up half the night creating a graphic model of an animal population. Who would be more tickled by this, Edward Tufte or Mihaly Csikszentmihalyi? Perhaps Bug’s own granddaddy, who is at this very moment down in the basement puzzling out one of his mutivariate equations, those Faberge eggs of math, adorned as they are with their many-shaped numerals and their strange Greek baubles.

When Bug is finished, he makes a giant check mark on the bottom of the page and draws a big smiley face just like the teacher does. He is delighted enough to grade his own work and give it high marks. I quiet the urge to tell my boy how happy this makes me. That’s the sweet little secret of intrinsic motivation, isn’t it? The itch is his to notice and to scratch. And it doesn’t matter one smidge who is proud of Bug, other than his very own self.

Rain and rain. A pyramid of monster cookies greets me when I return from the gray world beyond. Inside this cocoon, he has put beans to simmer in the crock pot and started baking the sourdough loaf. This one has a drizzle of honey to sweeten it.

Yesterday, as we meandered past storefronts and chatted with artists displaying their shards of glass and wooden eggs, he pointed out the Plow and Hearth. “What does that word mean? What is hearth?”

I tried to come up with the right definition, naming the specific thing (the inside part of a fireplace, no?) but also attempting to draw the edges of the concept with my meager words. I call up a picture of a Mary Azarian wood cut, that curl of smoke, the pot bubbling over the flame, an open chair near the table. A loaf, warm, waiting on the board. A jar of honey. A box of salt.

We walk on, and then it is the next thing. The child, the errands, the warming up for the next sprint.

Everything needs doing. Everything always does, no matter how much is already done. After stuffing the gift bags for Bug’s party with pencils and granola bars, I stop and curl up on the couch with the crossword from the Sunday Post. Giovanni is kind and lets me mute the football game to put on classical 90.1. A swell of strings pushes wide the walls.

The rain falls against the turning leaves, yellow poplars finally claiming their name. I mumble through the clues, calling out, “Four letters! Spy plane or rock band! Ends in X or O. We should know this!”

“I don’t know. ELO? NWA?” He slices asparagus and pepper, sautes garlic. In the oven, the loaf is rising, and he has started on the sauce for pasta. Much to my surprise, I complete the entire crossword. It may be the first time I have ever done so in one sitting. I do not know what time I arrived today. I do not know what time it is now. The couch no longer faces a clock. I forget to miss it.

It has gotten dark, and he has grated the parmesan. I hop up and put water glasses on the table, set silverware on the cloth napkins I gave him back in the winter. Candles, yes, and bits of romanesco, soft cones nestled among the shells. We eat and it is my turn to ask the questions about his tucked-away stories.

Inside that word, sanctuary and warmth, yes? A place of returning.

I only a manage a rough sketch, but it suffices for now.