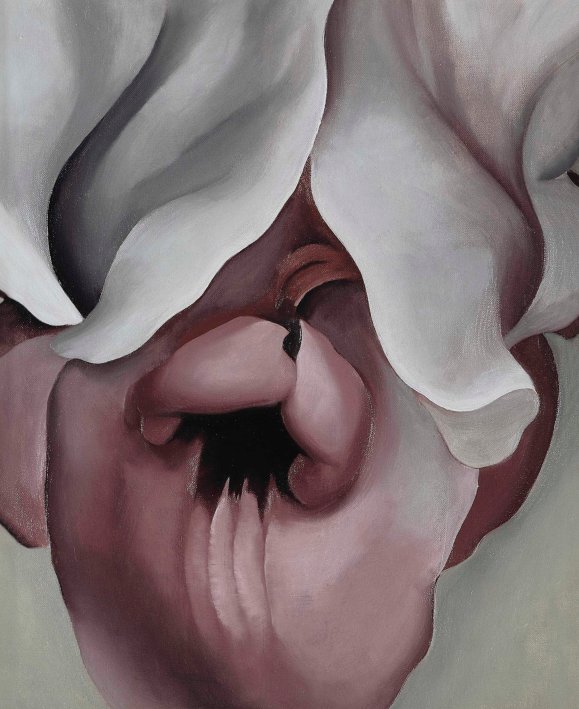 Until her dying day, Georgia O’Keefe fought against the notion
that her flowers resemble sexy ladyparts. Too silly. Titillating.
Low art.
Diminishing that lovely stroke to the hungry scratchings of a beast in heat.
Vulgar. Raw.

So raw the unavoidable there-ness of the iris and its four-foot petal,
the invitation to peer into the whole
that lives in one slender part. Brushstrokes render
the core and its thread, honors it exactly as it is. A stage in the cycle.
A blossom right after its first unfurling,
right before it falls back in on itself and returns to the next beginning,
drawing up sustenance, drawing down the light,
doing its wicked alchemy
as it surrenders the dust that starts the next.

So vulgar this, here. A mammal at its moment. Emerged from fetal in its blink
before returning again to the mud and stink.
So fleeting, the seed inside the egg inside the folds of you
while you are seed and egg your very own self.
And silly you say? Delightfully so,
the urges of these shambling constructions of organic matter.
Vulgar indeed in equal parts sacred.
The water borne cell, the oiled wing, the very cord that connects you to me
to every bit of mud and sky (unbreakable, no matter how hard we try).

My son asks me what happens when we die.
We return to what made us, I say. Seven tiny syllables so vast they trip the breath.
Does god make these cycles? Or is it the other way around?
How can the divine not thrive in this pattern,
Round upon round, returning always to the start?
Tip the gaze half a degree and see how perfectly imprinted this circular magic.
Vulgar indeed
Evaporation, decomposition, the relentless gnawing mandibles of underground arthropods
that devour the bodies and poop them out to enrich a soil that grows the green that feeds the cow that makes the milk that that nourishes the bones of the child
my child may someday father.
The flower of his lover, should he tend that way. The blood she sheds,
the ecstasy in each other’s fullness
and they the first ever — always we are the first ever —
to feel such a pleasure and such a sorrow.
When you begin to notice the sacred cycles,
you also understand that everything you love is over
almost before it begins.

So you hold it with such gentle wonder.

So you fight for each stroke of life to have its chance.

Unfolding like the ruffled lip, the iris and all it contains
Georgia painted
the atom pulsing with the surge of its electron cloud,
so much like this rock furred in meadows and mountains
hurtling through expanding space.
Of course the flower mirrors the ladyparts.

Each gesture an attempt to grasp that sacred cord
our bodies — these astonishing phenomena — can sense and almost transform.
What we allow our brains and hands
to envision and then shape. The reach for what we dare to believe.
From these bags of biological sludge, we make the songs and cathedrals,
the machines and the kings,
promises, poisons, and forms of prayer.
Through these bodies we carry on
a conversation with the rest of the temporarily ambulatory debris.
The ones who come after and the very planetary garden bed that holds us.
We echo forward along that cord, our movement altering the tone
of what rises to its crescendo in the next stage.
Every moment, we are altered by a thousand currents washing through and around us.

If we open to them — to right here, this god of cycles —
we learn everything we need to know to repair our brokenness.

Do we listen? Do we hear the music, the layers of its eternal, dynamic round?
Do we open towards the stroke of pink
And join with our keening voices
our newborn touch
life’s holy song?

4 thoughts on “This Holy Round”