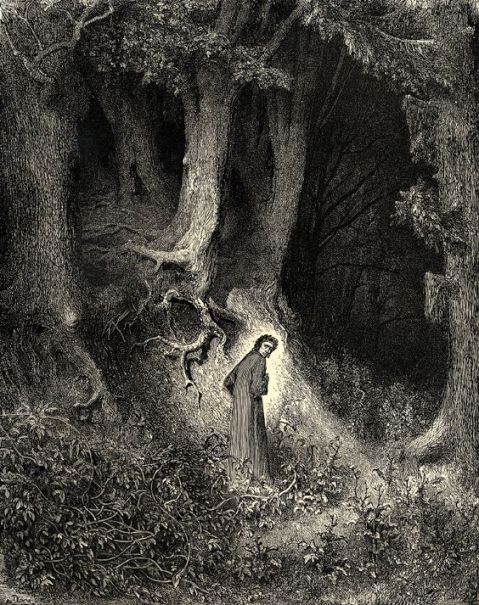 Someone is pooping in my neighborhood.  On the edge of the path that connects the playground to the AT&T parking lot, a pile of black feces swarms with silver-winged flies.  They are doing the important work.  All around the heap of waste are scattered thick restaurant napkins, crushed, stained with smears.  Someone squatted right here.  Right where our kiddos play.  Not in the brambles, not behind a tree, but right here.  When he (because I assume it’s a he, who else would be so bold?) finished, he left his tissue all over the ground.  The garbage can is 20 paces away, and there is another at each corner of the park.

The border between playground and AT&T is a strip of wildness.  Invasive species thrive there, vines choking out first-succession trees.  A woman from the county comes several times a week in her wide-brimmed hat and windbreaker pants to tear out the uninvited guests.  Sometimes she works with a team of teenagers who fan out over the place.  With gloved hands, they drag dead, snaking vines into heaps by the fence.  The wall of black plastic lawn bags is bitten through with thorn-studded branches.

These volunteers unearth signs of human habitation.  Sun-bleached camp chairs, two of them, lean in next to each other in a tight clearing inside what seemed an impenetrable jungle.  Broken bottles, fire scars.  Someone lives out here, at least some nights.

Who?  Who in our neighborhood would use this almost negligible swath of weeds for shelter?  It’s not more than 30 feet deep at its widest point, and it ends abruptly in the groomed grass of the town house complex.  There is nothing close, no public library, no metro stop, no place for a shower.

Also no lights.  No cops.

People sleep where they can.

The second pile appears three weeks later.  This is in the manicured place behind the houses where the fences face the road.  It is the same black heap, the same flies with silver wings flashing as they circle and feed.  The same scattered restaurant napkins, smeared and tossed aside.

Even as I make a wide circle around it, the flyblown pile of waste makes me stumble.  It’s like catching a toe on that one square that sits askew in an otherwise even sidewalk.   The mind veers left and right, trying to alight on an acceptable explanation.  It could have been a drunk teenager, or a kid with stomach woes whose father couldn’t get him home in time.  But nothing so familiar explains the napkins, the blatant location.  If dog owners can pick up their pets’ feces with a plastic bag, a neighbor could do the same with their own.

Something doesn’t fit the script.

This quiet, safe, suburban neighborhood has more going on than any of us would like to admit.

The rapist works out at my gym.  As I clock my miles on the treadmill, I see him cross the parking lot.  My chest hitches as it always does when he appears.  Here is another crack in the sidewalk.

Inside, the rapist pulls back on the tricep machine.  It is the same machine I have used and will again.  He has gray hair somehow both limp and shaggy.  The skin beneath his eyes sags.  He is tall.  The back of his T-shirt is torn between the shoulder blades, the fabric gaping like the mouth of a person either bored or lost.  He carries a folded paper that most likely details his sets and reps, but who knows?  He could be marking down the dimensions of the closet where he’ll store the bones.

Is he poor?  Most likely.  How much can a man hope to earn when he shows up on the sex offender registry?  How many chances does he have for building career both lucrative and legit?

He has a job at the supermarket up the street.  He checks out customers, one after the other, our baskets full of bagged spinach and breakfast cereal.  Sometimes I avoid his line.  It’s only because his presence is a bump in otherwise smooth linoleum, jarring me.  His simply being there is a reminder that this is machinery at work here, and components don’t always function as we hope they would.

Here, he is free from his hours dragging yogurt and meat across the scanner and repeating his script with his eyes never lifting from the belt, “Did you find everything okay today?”  Here, he flexes his hands inside fingerless gloves.  He grips the shoulder press.  He is alive and attempting to stay well, strangely enough.

I think, I could take him.  If he tried anything, I could do some damage.  He’s old now, he’s gotten a head start on this dying business.  But he wasn’t old then, and the person he forced himself onto/into either couldn’t or didn’t do enough damage to stop him.  Is he gifted with a mighty rage?  Does his power surge unchecked?

Could he step out from a shadow of vines and cut me before I have a chance to scream?  Did he (does he) lure?  Stalk?  Does he snap under stress?  Does he plot over years?

She is not the only victim.

He is not the only perpetrator.

Yet here he comes, down to stairs to the basement, to the cave of dudes.  Free weights line the walls.  I want not to see (the rapist).  Not share this mirror with (the rapist).  My discomfort is enough that I wish we could ban him, somehow make him just not be here where I have to stumble over this bump in the floor I’d been perfectly happy to ignore.  I keep on stumbling when he’s around, hyper-aware of (rape) what exists right here in my own neighborhood.  This is my home where I sleep sometimes with the sliding glass door open to let night in through the screen.

The faces of these other men here, the ones squatting to strain iron bars against gravity, they are not on the violent offender registry, as far as I know.  Most days, I glide right in.  I assume nothing dark or dangerous in these men.  Nevertheless, I am just as at risk and just as safe in their presence as in his.  The only difference is that his fatal flaw is public record.  We know one extreme he is capable of reaching: he violently raped another human being.

What made him rape lives here still, even when he is not around.  It lives here among us in what we teach and what we don’t, in our false promises and our deprivations.  It has a name most of us are unable or unwilling to pronounce.  It’s easier to brand him with the name (rapist).

Banning him would not make us any more secure.  It only allows us to return to our absurd faith in a smooth, unbroken terrain meeting our feet.

Something makes my dog jump.  It is nearly midnight at the playground.  We are walking through to get to the lighted trail beyond the hedgerow.  She tenses and leaps sideways towards me, her head pointed like a laser into the dark.  Somewhere over near the jungle gym, a fox?  A deer?  I give her a tug to settle her down but she is on full alert now, feet almost airborne as she prances half sideways, body quivering with its latent flight.

Someone is standing next to the slide.  I see now the form.  Big, man-sized, a silhouette on this almost moonless night.  I can only tell by the absence of reflection in a bulked-out human shape.  He stands perfectly still.  He is angled towards us.  I keep walking and he moves slightly, shifting on his feet.  He is tracking us.  We are tracking him.  I hold the leash tight and curl my fingers around the key in my pocket, as if that flimsy thing on the beaded angel key ring would do any damage.  I keep my body turned toward him, glaring at him through the dark.

(When encountering a mountain lion, make yourself big.  Take off your jacket and fan it out behind you like a cape.  Stand tall, be loud, do not drop your gaze, DO NOT RUN.)

I square my shoulders lengthen my spine.  I pull air in to inflate my lungs.  To flee?  To fight?  To scream?  It’s not a thought so abstract.  It’s just this pounding in my throat:  Keep the f**k back, stranger.  I’ll stab your eyes out.

I move through the dark facing towards him while stepping decisively away.  The dog bangs against my shins.  We pass through the black cut in the brush to the place where stadium lights spill over the sidewalk.  We are just as exposed here, and he will be too if he follows us through.

I have walked here at night for years.  I want to believe in the smooth expanse, the predictability of this place.  Of course, terrain is never so clean, not even on ice.  That’s why there are Zambonis, why we take breaks.  It’s why we stand aside.  We hope things can be returned to their ideal state before we go in and tear them ragged again.

Is it easier to trust the seamless path than to keep eyes trained on every next step?  This only works until the more complicated truth forces itself into our line of sight, until it blocks our path.

I wonder if there is a third way.  Between ignorance and fear, between the bliss of imagined seamlessness and the paralysis of cataloguing every potential crack in the sidewalk, is it possible live with informed faith?

We recognize that while we are lucky for our comforts, we are not entitled to them.  We work to distribute more equitably the freedoms, resources, and support that have allowed us our expectations of safety.

To do this, we must discard our belief in earned privilege.  We make the choice to act with a determined compassion for all the members of our community, even those whose presence makes us stumble.

In all of this, we turn towards the broken, messy, thorned places with our arms unfurling the capes we have tucked into our shoulder blades.  We pull the air into our lungs.  We grow as big as we always have been.  We face down the shadow even as we recognize its right to exist alongside us.

Even as we recognize it as our own.

Image: Gustave Dore from Dante’s Divine Comedy: “In he middle of the journey of our life, I came to myself, in a dark wood.“

1 thought on “Our Shadows Live Here Too”